Set in Berlin in the months preceding the fall of the Berlin Wall, this German language drama tells the story of an East-German Communist family gathering for the 90th birthday of the families patriarch. Adapted from Eugen Ruge’s semi-autobiographical 2011 best-seller, In Times of Fading Light is a slow moving character piece which explores the domestic side of Communism and the impact on those who chose the wrong side of history. 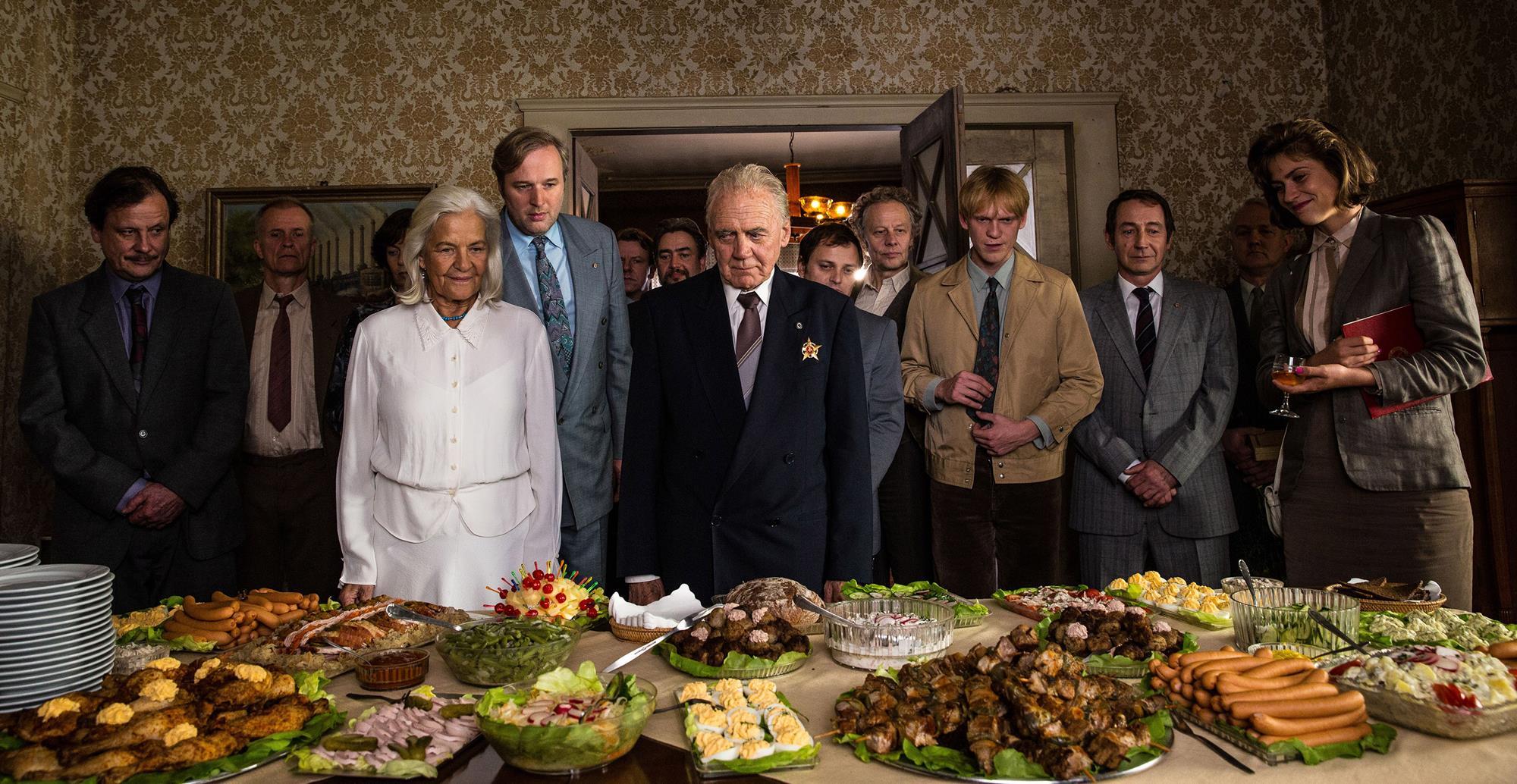 Bruno Ganz (Downfall) plays Wilhelm Powileit, a former high ranking Communist celebrating his birthday. As an endless parade of family, friends and former colleagues make their way to his party, we see family secrets revealed and a man coming to the realisation that the world he once knew would never be the same again.

In Times of Fading Light is an interesting movie that seems confused by what it wants to be. The moments that are most focused are dull and uninspiring, and the parts that pique your interest don’t seem to mesh with the rest of the story that’s being told. The last 10 minutes of the film feel rushed and unfinished, and leave more questions than answers about the 90 minutes that came before it. Ganz and Hildegard Schmahl are strong in their performances, but the journey that’s being taken lets them down.

Perhaps a good film for those who enjoy a heavy dose of artistic pretention in their movie going experiences, but overall not a film that will appeal to the masses.  In Times of Fading Light can be seen at the German Film Festival until the 10th of June, or alternatively it’s available to be streamed via SBS on Demand.

Reviewed by Jell for Moviedoc

THE BOOKSHOP is the story of middle-aged widow Florence Green (Emily Mortimer), who starts her own business by opening the first-ever book store in the small seaside town of Hardborough, England in 1959. As word of the new shop begins to circulate among the locals, Florence is faced with a number of challenges. None more so than one by the name of Violet Gamart (Patricia Clarkson), who firmly and instantly disapproves of Florence’s plans to inhabit and convert a historic building into a bookshop, for she has ambitions to turn it into an art centre.

A mild-mannered and small-scale drama, THE BOOKSHOP ultimately satisfies and does boast an excellent finish, even though it could do without a few extra chapters that prolong its story along the way.

Spanish-born filmmaker Isabel Coixet’s award-winning screenplay, which is based on Penelope Fitzgerald‘s novel of the same name, is quite content to devote several of the film’s 113 minutes to many of its minor characters. The majority of this generously-allocated time is certainly time well spent. For instance, Florence‘s enthusiastic young employee, Christine (Honor Kneafey) and fellow book-lover who’s also her number one customer, local recluse Edmund Brundish (Bill Nighy), both forge a genuine rapport with the lead character and significantly contribute towards the central story, in their separate ways. Strangely though, this light drama only includes an equally (if not more) important character in shorter scenes that are mostly dispersed throughout the film. THE BOOKSHOP would certainly benefit from widening its open doors to its wonderful actress Patricia Clarkson’s portrayal of Violet Gamart and closing them to certain others instead. Even if it is the same way in the novel, this character feels under-developed here and the skills of Clarkson are certainly under-utilised.

Thankfully, the tender and tremendous lead performance from Emily Mortimer, an easily digestible central story and its aforementioned very fine finish do ensure that THE BOOKSHOP is worth borrowing someday.

A feature-length remake of their 2013 short film by the same name, Ben Howling & Yolanda Ramke’s CARGO is an Australian post-apocalyptic drama/thriller that carries more than enough suspense to please fans of the genre and contains a universally human story on-board that’s bound to broaden its appeal just as much as the casting of its international star.

English import Martin Freeman (THE HOBBIT trilogy, BLACK PANTHER) is Andy, whose number one priority is to keep his wife, Kay (Susie Porter) and baby daughter, Rosie, safe from a virus outbreak that has turned most of the population into zombies. Andy is well aware that it takes just 48 hours to fully transition from man to monster once someone becomes infected. Fortunately, this horrifying reality is one that the family of three have managed to avoid, having lived together in a houseboat that is slowly drifting along a river somewhere in outback Australia. When they are forced to leave their floating abode due to running low on food, they become exposed to new dangers from the moment that they set foot on land.

A generous number of filmmaking features will receive their deserved recognition in this review, but first, let’s get straight to the stand-out of them all.

To begin, it is merely a minor sub-plot operating in the background of the picture. The story of a young indigenous girl named Thoomi (Simone Landers), whose mission is very similar to Andy’s where she too is protecting a loved one from the dangers of the world, rises in prominence with each passing minute. The inclusion of this character and the development of sections of the plot brought forth via Thoomi represent indigenous culture and characters in an empowering manner that has never been executed before. As an added bonus, this same great achievement results in this zombie movie being markedly different from any other and also stamps CARGO as an identifiable and uniquely Australian production. This Oz-zom (Aussie zombie) flick continues to impress with its sweeping cinematography work and a largely atmospheric music score. Filmed entirely in South Australia, the reoccurring aerial shots enhance the isolation, beauty and brutality of the post-apocalyptic world being depicted and the diverse mix of sound and music consistently heighten the level of suspense.

In fact, that suspense casts an immediate stranglehold over you right from the opening minutes of the film. For the entire opening act, it rarely eases. A couple of paths that CARGO treads down from this point forward do normalise the film to a certain extent, which does ease some of its tension. Even if CARGO doesn’t re-produce the same potency in suspense it did before, the strong presence of Martin Freeman in the lead role and the fate that awaits each character mentioned in this review is always an involving journey to be a part of and is perfectly ended.

A film made by a woman, starring a woman in a movie that is made for women, all sharing one common denominator – the age of participation is above forty. I GOT LIFE!, or AURORE as it is known in France, is a likeable comedic drama that may struggle to extend its appeal beyond its desired audience.

When we meet the titular character, Aurore Tabort (Agnès Jaoui, who also collaborates to the screenplay), she is at an uncertain time in her life. Separated from her husband, she works as a waitress for a boss and alongside colleagues who are much younger than she is while dealing with the physical reactions of menopause on a daily basis. Happiness in her life is sourced from the companionship of her best friend, Mano (Pascale Arbillot) and two daughters, Lucie (Lou Roy-Lecollinet) who lives at home with Aurore and Marina (Sarah Suco), who’s expecting her first child. While out one afternoon with Mano, Aurore bumps into Christophe (Thibault de Montalembert), a man who she had a brief love encounter with at high school. Could this surprise rendezvous be a new opportunity for Aurore to find love all over again?

The plot in this French comedy/light drama is largely rendered via a random and wacky series of stand-alone scenes, some recurring sequences and arbitrary dialogue that (at best) does regularly offer mild amusement. When I GOT LIFE! takes an episodic break from being so quirky and goes more… normal, its uninspired directing and lack of substance and trajectory in story instantly make it a dull film to watch. Even for its targeted crowd, the screenplay is more limited than it wishes to be in what it has to offer and consequently places a greater reliance on forming an interest in and affinity for the various characters in this movie. Luckily, they aren’t difficult people to be in the company of for an hour and a half. Particularly the impulsive and very cheeky Mano, who steals almost every scene she appears.

Should you manage to feel a similar way to this, then I GOT LIFE! won’t find itself in too much strife.

Trailer
I GOT LIFE! (AURORE)

Director
Jason Reitman
(JUNO, UP IN THE AIR, THANK YOU FOR SMOKING)

Working together for a third time in comedy/drama TULLY, writer Diablo Cody and director Jason Reitman are best known for their stand-out movie from 2007, JUNO. Here, the writing and directing duo team up for a second time with star Charlize Theron (after the 2011 under-rated comedy/drama YOUNG ADULT), who gained fifty pounds to play Marlo, a married mother of two who is heavily pregnant with her and husband Drew’s (Ron Livingston) third child. Marlo isn’t exactly ecstatic by the impending arrival, partially due to exhaustion and other reasons that will become evident while watching the film. During dinner one evening, Marlo’s brother Craig (Mark Duplass) recommends a night nanny to his sister that he and his wife previously hired. Not too long after the birth of her third child, Marlo employs the young, spirited and rather unorthodox Tully (Mackenzie Davis), which springs some surprising outcomes. Though I can’t necessarily speak from experience, I am confident that the depiction of motherhood in TULLY is nothing short of being utterly realistic and downright truthful. This outstanding characteristic is written straight from the personal experiences of Diablo Cody and is one that parents, particularly mothers, will easily identify with. While TULLY absolutely nails this key aspect of the story, the screenplay does a fine job of raising further matters of importance derived from the central plot, but isn’t able to follow them through to a satisfactory level. In its defence, these separate, yet connected issues aren’t the focus of this comedy/drama. Nonetheless, those viewers who will resonate with what is developed by TULLY’s script deserved more practical solutions and less dismissive treatment of these matters than what is demonstrated. Despite this moderate blemish, the dialogue constantly features a number of sharp and hilarious lines that are custom-built to be expelled from the mouth of an excellent Charlize Theron. She shares great chemistry and some truly heartfelt moments with co-star Mackenzie Davis, who’s equally as good.

With plenty of laughter and substance, TULLY is a worthwhile contributor to one of my personal favourite genres of film. 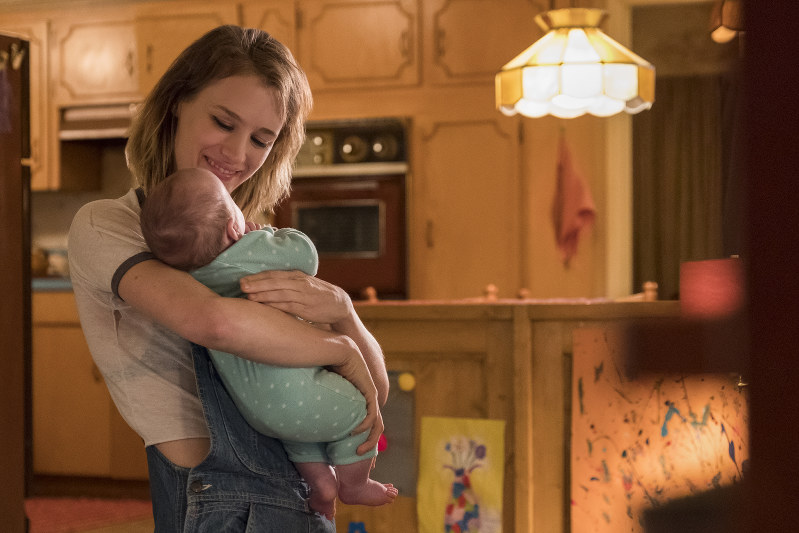