If like me, you’ve seen every film that forms the Conjuring Universe to date, then you may wonder where the timeline for this seventh instalment fits. Well, in quite unique style, this sequel to 2014s ANNABELLE and 2017s ANNABELLE: CREATION is set between the opening and main plot of the very first Conjuring film! As ANNABELLE COMES HOME commences, the titular haunted porcelain doll is handed over to paranormal investigating pair Ed and Lorraine Warren (Patrick Wilson and Vera Farmiga) where she is safely stored inside a glass box that’s situated in their artefacts room. A year later, the Warren’s begin working on a new case and employ babysitter Mary Ellen (Madison Isemanr) to mind their young daughter, Jane (Mckenna Grace) while away overnight. When Mary Ellen’s curious friend, Daniela (Katie Sarife) pays a surprise visit, she unwittingly releases an evil spirit via Annabelle after foolishly ignoring the prescribed warning on the glass box that reads ‘Positively, do not open’. 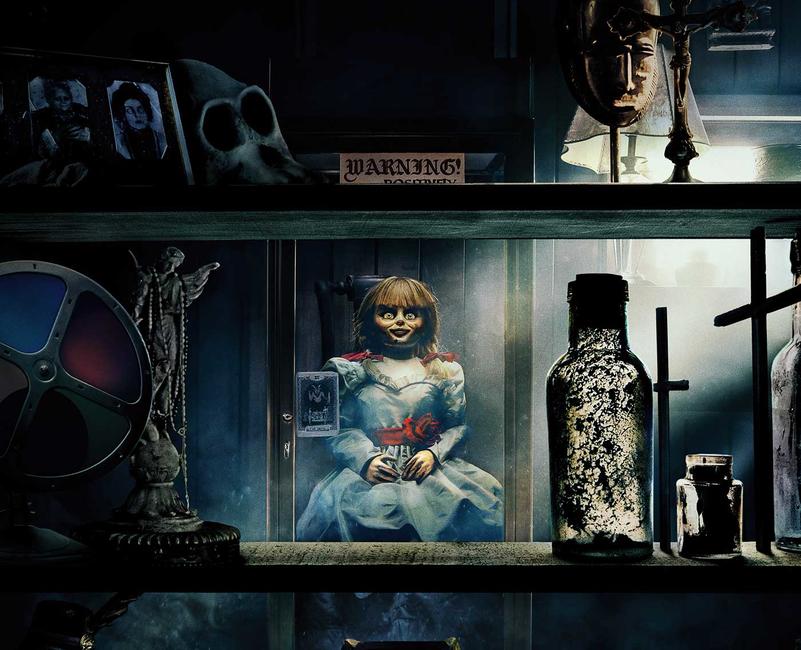 During the earlier minutes of this sequel, it became clear to me that I had been coerced into a game, of sorts. A game in which I had little control over, but was nonetheless certainly a willing participant. As the writer of all three Annabelle films and one of the three writers behind IT, first-time director Gary Dauberman demonstrates that he’s no novice to conjuring up the creepy and quite capably luring his audience. For a good chunk of its duration, ANNABELLE COMES HOME is simultaneously fun and suspenseful to watch, courtesy of its horror scenes that I can only describe as being intentionally teasing by way of combining some faux scares to go with its genuine jumps. Later in the film, the horror scenes do gravitate to being more formulaic of the genre, but by then there have been a couple of key developments embedded into the film’s story that can compensate. Specifically, but without saying too much, the motivation propelling Daniela’s curiosity is penned with real substance. Also, Annabelle might not be the single source of scares in her sequel! With much of the film playing out in real-time, ANNABELLE COMES HOME is fairly reliant on the leading performances of its three young females, whom each hold their own very solidly indeed.

Moviedoc thanks Roadshow Films for the invite to the screening of this film.

When Jack Malik (Himesh Patel) is involved in a bicycle accident caused by a global power outage, he wakes to a different world to the one he knew before.  In this world, ‘Strawberry Fields Forever’ might better be known as your local vegan café, rather than a classic song by the ‘fab four’. For some (never explained) reason, this power outage has erased most of the worlds’ knowledge of The Beatles, along with numerous other cultural phenomena. Fortunately, Jack is one man who does remember them, and he also happens to be a struggling musician….you can see where this is going can’t you? What follows is Jack’s journey of passing Lennon and McCartney classics off as his own, all while navigating his feelings for best friend and former manager, Ellie (Lily James).

With a dream team of Danny Boyle (Director) and Richard Curtis (Screenplay/Story) it’s hard not to go into Yesterday with big expectations. Curtis in-particular has such an innate ability to write these perfectly awkward, yet entirely charming characters; think Hugh Grant in Notting Hill, Colin Firth in Love Actually or even Domhnall Gleeson in About Time. In Yesterday the formula remains much the same, however it appears this time that the magic might be missing. It’s frustrating to concede that Patel is the main issue here. He is certainly a talented actor that possesses a great sense of comedy; one only needs to watch a couple of episodes of Damned to realise that, and I love the fact that here we have an ethnically diverse romantic lead, particularly when that diversity isn’t a plot point for the film. But where the above-mentioned actors have been able to perfectly blend the awkward with the charm, it would seem that Patel is only capable of the awkward. The chemistry is certainly lacking between he and James and none of that should be attributed to the starlet. It shouldn’t be hard for any actor to convince us that he’s in love with Lily James, but Patel made it look like it was more of an annoyance than anything else. Even when refocusing on the story of Jack’s music career, it all felt a little rushed, trying to get from one hit to another without letting the audience really revel in the brilliance of the music. Add to that a myriad of frustrating plot holes and the over reliance of the same joke to get a laugh, it’s all a little less magical than the synopsis lead you to hope for. It’s not even the foray into ‘otherworldly’ that lets the film down; Curtis was able to brilliantly navigate us through the wonders of time travel in About Time, which had its own fair share of plot holes, but the charisma of the cast allowed you to forgive its foibles. Aside from the stoner roadie (played to perfection by Joel Fry) who was reminiscent of Rhys Ifans’ character in Notting Hill, there weren’t any characters that were consistently able to provide the comic relief that was expected from the film. Not even Ed Sheeran and Kate McKinnon were able to add substantial colour in an often beige affair.

I can’t help but check my bias at this point of the review. A lot of my frustration and disappointment was based around the expectation of greatness from one of my favourite film writers. When I peel back the layers of apathy, Yesterday isn’t actually a bad film in the grand scheme of things, it’s simply not as enchanting as I hoped it would be. Is it a good film to watch to kill a couple of hours? Definitely. Is it in the realm of a Love Actually whereby it commands a minimum of annual viewing? Definitely not. My recommendation for this film: Forget who wrote the screenplay, and go in with zero expectations, then maybe, just maybe, this might be a film you’ll fall in love with.

Director
Tom Harper
(THE WOMAN IN BLACK 2: ANGEL OF DEATH)

There are many reasons why I love critiquing movies. Discovering and then sharing precious little gems such as WILD ROSE with you all is one of them. I knew very little detail of the plot prior to viewing this Scottish drama and have no doubt that this worked to my benefit, as I’m sure it will for you also.

All that you need to know revolves around the film’s titular character, Rose-Lynn (played by Jessie Buckley from BEASTLY and HBO Series Chernobyl) and her unyielding ambitions to leave her home in Glasgow and become a professional musician in Nashville, Tennessee. There is of course so much more to this story than that brief synopsis I’ve given you. However, to reveal some of those specifics and the characters they involve would unfairly (and greatly) alter our perceptions of the film’s protagonist and her journey. Rather, allow yourself to become instantly absorbed by the several “hurdles” delaying and perhaps even halting the undeniably and supremely talented Rose-Lynn’s arrival in Nashville, the pinpoint characterisation work and Jessie Buckley’s mesmerising performance. This is a truly stand out and star making showing from the emerging actress that deserves to (and I’m betting from now will) earn her an Oscar nomination in early 2020 (and a Golden Globe nomination at the very least). As I alluded to above, this extremely determined and brutally honest, albeit rather brash character could easily have been one to feel disdain towards and share minimal connection with. But Jessie Buckley throws everything but the kitchen sink into her portrayal of this human being, gaining a true understanding and drawing empathy from viewers where it might not have been possible otherwise. Though the film’s story is largely centred on its protagonist and her trajectory all throughout, there isn’t a reliance on this aspect to anchor the movie either. In fact, WILD ROSE is very strongly supported by varying contributions to come from characters played by actresses Julie Walters and Sophie Okonedo, just to name a couple. They play separate, albeit vital roles to the woman that Rose-Lynn will become by the end and are part of the reason why WILD ROSE is a heartfelt, inspiring and triumphant film.

If like me, you loved the Irish music driven comedy/drama SING STREET, then you’re bound to be equally swooned by WILD ROSE. Highly recommended. Taken from the novel of the same name and loosely based on the life story of Melita Norwood, Red Joan is the story of a young Cambridge student in the 1930’s and 40’s who becomes tangled up in the local student Communist Party and becomes a spy for the Soviet Union. Swapping between past and present day, Judi Dench and Sophie Cookson take on the role of Joan Stanley. Cookson plays the  idealistic young scientist whose major weakness is her attraction to the charismatic, Soviet revolutionary Leo (played by Tom Hughes). Through Dench we see the seemingly innocent old lady, detailing to her son how his mother came to be apprehended by Government officials in the later years of her life.

The concept of Red Joan is interesting enough and whilst the execution is decent, there’s just something lacking to make it memorable. It almost feels as like the story is just going through the motions with no major twists or surprises that you might expect in a spy drama. This is the first feature film for director Trevor Nunn in over twenty years, and it would seem that he’s better suited to the TV movies and theatre that he is more well-known for. I can’t help but feel that a better experienced film director could have extracted more from the screenplay than Nunn has here.

Despite that apparent lack of pizzazz, there is still a charm to the film, if for no other reason than the setting in which it takes place. Judi Dench also adds a certain level of gravitas, but you have to wonder how many more so-so films she can get away with after the lackluster offerings of Victoria & Abdul and Murder on the Orient Express. Dame Judi has an innate ability to be brilliant, even when used minimally, but unfortunately she didn’t have enough to work with on this occasion. 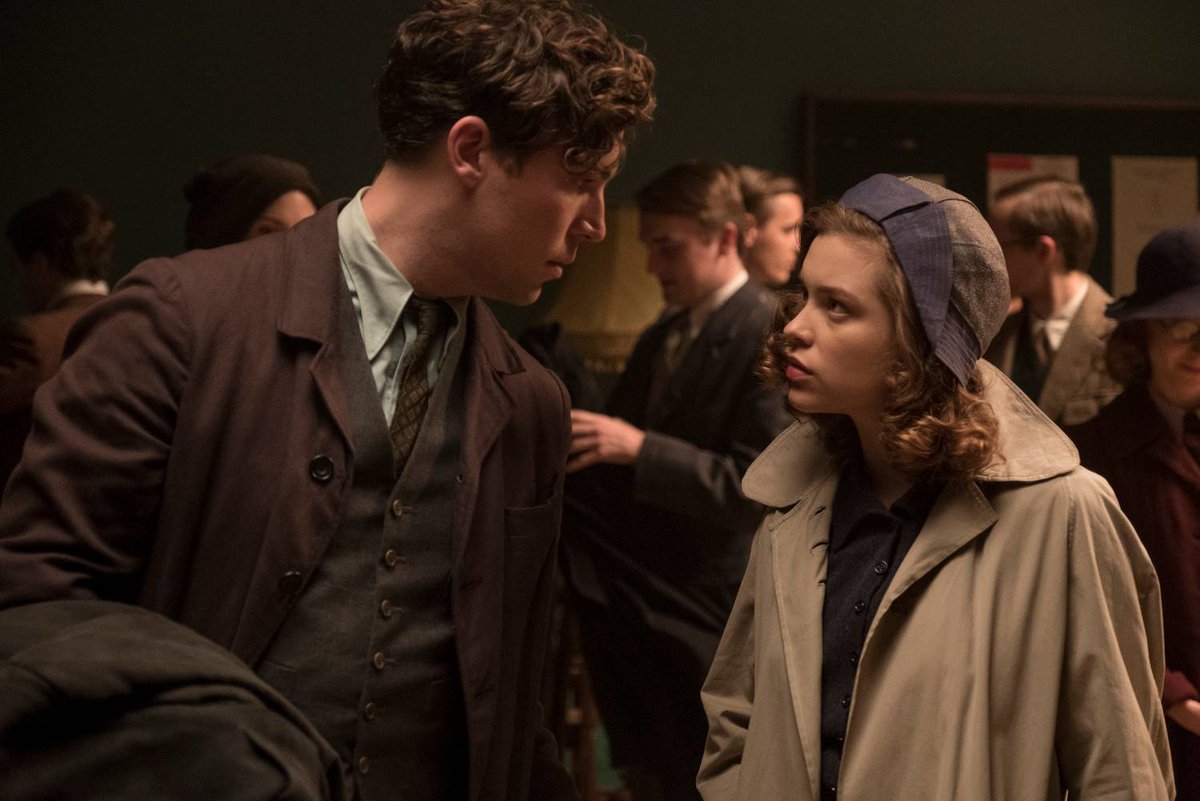 All in all, Red Joan is a sufficient way to kill 100 minutes, but beyond that, it’s a rather forgettable film, which seems a waste of great acting talent.

Moviedoc thanks Miranda Brown Publicity for the invite to the screening of this film.